In 1814, the female sculptor Anne Seymour Damer made a terracotta bust of Queen Caroline, now on display in the Wernher Collection at Ranger’s House. Anne was notorious among the artistic London elite for her relationships with other women. In 1795, diarist and gossip Hester Thrale noted that “whenever two ladies live too much together … ’tis a Joke in London now to say such a one visits Mrs Damer.” By herself, Anne Seymour Damer is already a fascinating figure. She crossdressed, met Napoleon, and asked to be buried with her sculpting tools and her dog. We may consider Anne a lesbian, and interrogate how her status as an aristocratic widow afforded some freedom after her husband’s death to pursue relationships with other women. By looking at Anne Seymour Damer’s network, however, we are able to identify other queer individuals who moved in the same circles, sketching a broader picture of elite queerness in Georgian London. 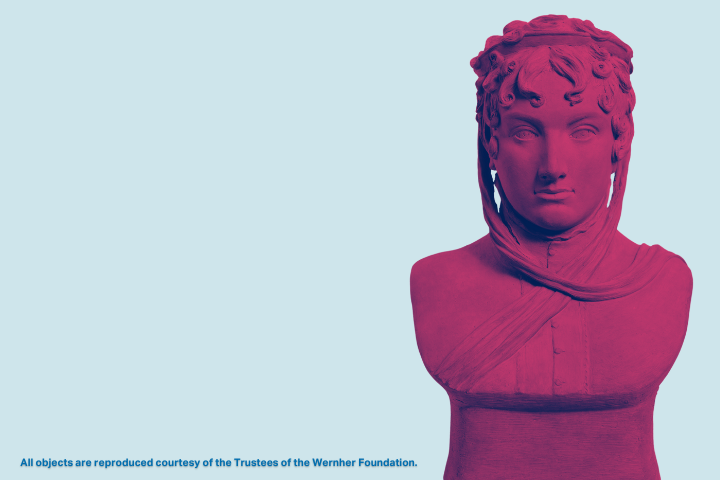 Anne’s godfather was Horace Walpole, the son of Britain’s first Prime Minister,  Robert Walpole. Horace Walpole never married and his effeminacy was commented on by contemporaries – once, in 1742, Walpole passed for a woman at a masquerade. The same Hester Thrale who wrote disparagingly of Anne’s relationships with women identified her godfather’s friend Sir Horace Mann as a ‘finger-twirler’ in 1794, which she describes as “meaning a decent word for Sodomites”. During the design of his neo-gothic mansion Strawberry Hill, Walpole gathered a ‘Committee of Taste’ which included the architect John Chute, who lived in Florence for some time with his younger partner Francis Whithed. Upon his death Horace Walpole left Strawberry Hill, an example of ‘queer gothick’ architecture, to Anne Seymour Damer. In a small adjoining cottage named Little Strawberry Hill, Walpole had already established the author Mary Berry, who would become the great love of Anne’s life.

In fact, Little Strawberry Hill had previously been home to actress Kitty Clive, whose liaisons with other women – including Anne Seymour Damer – were winked at in an anonymous satirical poem, ‘A Sapphick Epistle’, in 1778. Anne was also connected to the comic actress Elizabeth Farren, with their affair the topic of gossip prior to Farren’s later marriage. Historian Emma Donoghue notes that the figure of the lesbian aristocrat pursuing an actress was a common eighteenth-century motif, looking at Anne as an example of “the contradictory state of knowledge about passion between women in this period” – on the one hand, Anne was able to engage in relationships with other women without being ostracised, but enough suspicions were raised to set tongues wagging.

Another queer open secret of the Georgian era was the ménage-a-trois relationship involving Georgiana, Duchess of Devonshire, her husband the Duke, and Lady Elizabeth ‘Bess’ Foster. Georgiana had grown close to Bess before she became her husband’s mistress, and the three lived together for around twenty-five years.

We may now describe this as a polyamorous relationship, but at the time this was a most irregular arrangement. In 1775, prior to meeting Bess, Georgiana was painted alongside Anne Seymour Damer and Elizabeth Lamb as The Three Witches from Macbeth in a portrait by Daniel Gardner. All three were society ladies with shadowy political influence, yet it is fascinating to consider Georgiana and Anne’s association as queer women.

By examining the social circles that historical queer figures moved in, we are often able to draw connections to other people whose lives were lived outside of the contemporary heterosexual norm. This focus on networks is useful for demonstrating that same-sex relationships were not always entirely secret or beyond the pale in the past, particularly in certain circles.